The It movie has hit theaters everywhere, and now everyone is looking for a Pennywise Costume like crazy to dress up as him for Halloween. The Pennywise costume has become a classic amongst Halloween costumes. In case you don’t know who Pennywise is, he’s the demonic clown from Stephen King’s book IT. It (Pennywise), comes to the town every 27 years in a cycle to eat children for energy before going to dormant to repeat IT’s cycle. IT follows the journey of boy and his friend’s in looking for his brother that was stolen by Pennywise, and ultimately devoured.

Trying To Get It GIF from Itmovie GIFs

The group of friends finally learn, with the help of Ben and his secret love for learning about the towns he lives in, that the town is actually cursed. While at the library, Ben learns that the town has been plagued by unexplained tragedies and child disappearances for centuries. He then encounters ” It ” in the form of the burnt, headless corpse of a young boy. This is where his nightmare with Pennywise begins.

This Town Is Cursed GIF from Itmovie GIFs

The journey of a group of misfit pre-teens all began when Bill makes his younger brother, Georgie, a homemade sailboat to play out in the rain with along the river to watch it float. The floating boat became a physical metaphor of Pennywise’s favorite phrase to say, “You’ll float down here!”, and “You’ll float, too!”

Take a look at the movie preview! As a Stephen King Fan, I definitely can’t wait to see this movie. I can honestly say that once upon a time, I owned every single book of his…including those under his pen name, Richard Bachman. However, I can’t wait to see the full effect of the new Pennywise Costume that they did in action. It’s definitely a little bit creepier in the previews.

The movie has grossed in over $371 million world wide upon release! It has become the blockbuster movie to finish up the Summer of 2017. It was a movie that was greatly needed in this dry spell of so-so movie releases.

A Pennywise Costume for Everyone

Yes. Everyone wants a Pennywise Costume to try to scare the bejeezus out of people. It doesn’t help that a great part of the population is already afraid of clowns, but now that have a greater fear of clowns; especially for those that hold red balloons. The red balloon just adds to the eeriness factor.

Nope. Nothing too creepy about this image at all!

Here’s a few Pennywise costume selections that I’ve found to help you out in your search: 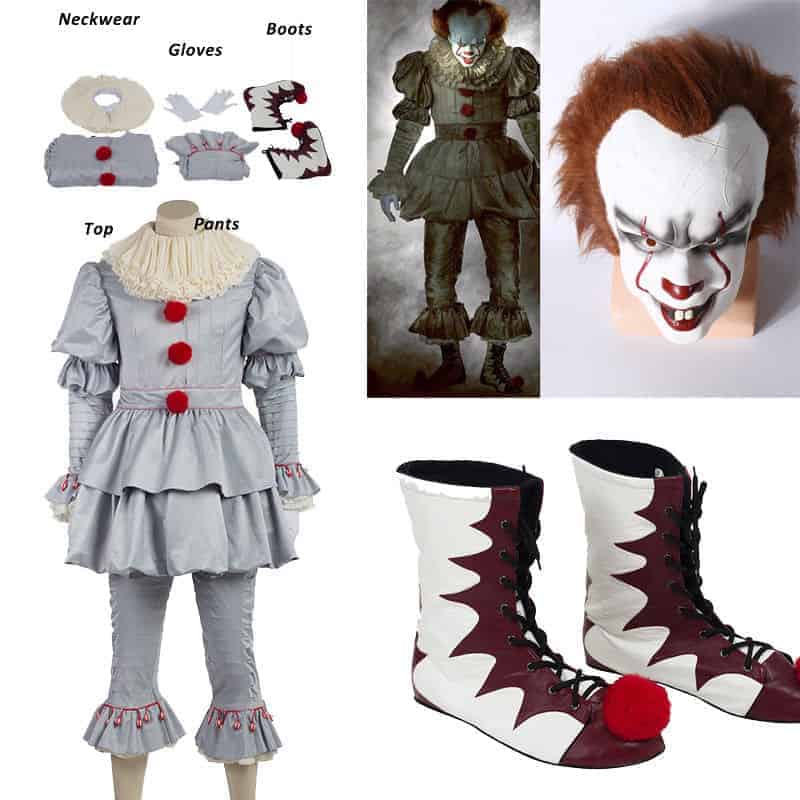 This is an awesome Pennywise costume! It comes with a mask and skins for your shoes to overlay on top of them. You can check it out by clicking here. It has some pretty great reviews, and lots of daily views! So if I were you, I would grab it as soon as I could. If they happen to sell out, then you can checkout this seller over here. I’ve found them on other sites, but they run as much as $230 for about the same exact quality. IF you’re not afraid of the price, then take a look at this amazing Pennywise costume!

Now, if you’re more of an old school puritan and want to stick the Amazing Tim Curry version of Pennywise, then you’re in luck!

There are fabulous renditions of the classic Pennywise costume out there on Market. You can find them readily available on Halloween Express and many other sites! Plus they have some really great coupons to save a little moolah on the side.

You have a couple of choices when it comes to finishing up your Halloween Pennywise Costume. You can either wear a mask, or do your own makeup. If you’re looking for a fabulous mask, then check out this one. You can even get the creepy Pennywise Hands/claws and crazy looking teeth.

For this DIY Pennywise Costume Makeup, you’re going to need a few basic supplies. The best part is that the items used are not horribly expensive to purchase, they show some fabulous tips, and it’s an easy skill level! Here’s what you’ll need:

All you have to do now is follow along with the video tutorial below! You’re going to love this so much!

Now how freaking easy was that?! I love that it really doesn’t take up that much time, and the hairspray helps keep things stay in tact.

Now you can go out and fun while scaring the neighborhood children, and possibly a few adults.

So, what are you going to be Halloween this year? I would love to know! Leave me a comment and tell me.

Did you already see the movie? If so, did you know these super cool facts & Easter eggs that you might have missed?

Enjoy these other Halloween posts: