So, I owe you all a huge apology because I haven’t written anything new lately in the last few weeks. I had a huge meltdown with my host providers with all of my sites…as all of my sites have been down (for the most part) for almost 2 months. If you had issues in coming to read and catch up on updates, that’s the reason why you couldn’t get to my posts…and why I couldn’t write any. However, this issue is solved and it’s time to do some writing. So, let’s catch up!

The snow has come and gone here in NJ. It’s been slightly frustrating because I couldn’t take Angela out on very many walks like I would have liked to. Especially when trying to walk the dogs, it becomes very encumbering in watching her and the dogs at the same time. However, we did what we could. Instead of walks, we just went on a lot of car rides together. This way, she was still able to get out of the house so she wouldn’t suffer from that Cabin Fever syndrome. However, with car rides comes all of Angela’s amazing stories. I don’t know where she comes up with them, but she can really talk forever..non-stop…without breathing…and without fail of any detail of her stories. Yes, she’s told me the same exact stories over and over so many times…but I let her tell them anyway. This way, she can still experience the thrill of telling me (and Stephen) her stories like it’s something new. If it becomes overwhelming because of the repetitive nature of the story, we do remind her that she’s already told us 10 times just a few minutes ago. She smiles in acknowledgement, and then informs us that it was just so super important. 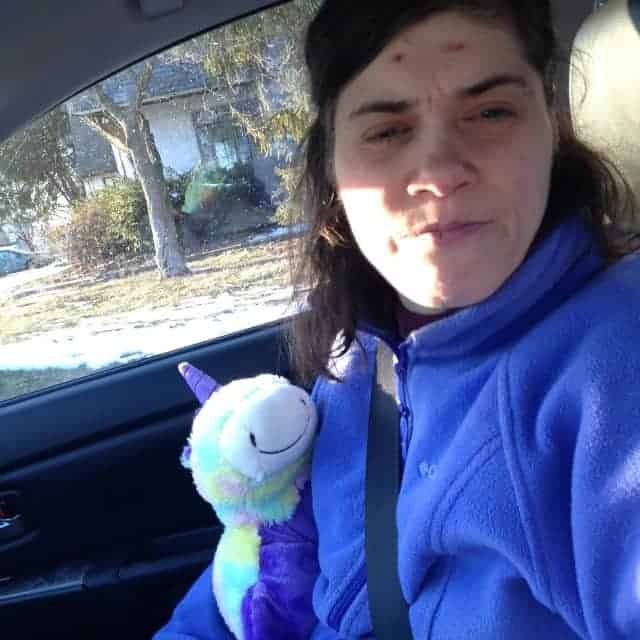 She Picks Her Face & Scabs When She’s Stressed

I feel bad for her when she does it, but we’ve been trying to correct it the best we can. You can see it in the photo above. When she goes through the meltdowns, she has the habit of picking all of her sores or just about anything that she can. She had two scabs on her forehead that she kept picking at. Constantly. However, I noticed it’s when she’s stressed in thinking about something, or when she’s irritated. What would normally take 2 weeks to heal, took approximately 3 months. Though, I think we finally have her “Scab Picking Tic” abolished. The true final cure came from her being on birth control pill. It all stems from her being overly stimulated from her hormone levels. We’ve definitely seen lots of behavioral improvements since being on birth control.

Last week, we actually had 3 days of meltdowns. Overall, they just weren’t as bad as they normally were. We’ve come to accept certain things from her, such as her obsessive talking. I don’t think that’s ever going to stop. The only thing that we are trying to teach her is to think about what she says before she says them. It’s a lot of tough parenting, but we’re definitely coping much better with it all. We’ve learned to put on our “ear muffs” and ignore a lot of things, but they do get to us sometimes…and have to make it a point to tell her to lower her voice to where we can’t hear her. She likes whispering to herself to vent, so we remind her to whisper.

Her Meltdowns are “Better”

Yes, she still has meltdowns…but they are decreasing in size and intensity. Normally, we have to wrap her in blanket (to protect her from harming herself and us from bites, kicks, punches, and head bunts) and the screaming, yelling, and crying lasts for about 30-45 minutes. Recently…they last for 5 – 10 minutes per session that she had them.

Yes, these meltdowns are still emotionally and physically exhausting because she is strong and that adrenaline is pumping through her.

Yes, the screaming and crying spurts are emotionally taring upon us. It’s hard to listen to hear scream, and know she has no control over it. Luckily, our walls are pretty sound proof…or the cops would have visited us a long time ago. Though, all of our neighbors know my sister and what we deal with at times…so they understand. They know we’re not abusing her, and they know that she just can’t help herself. So…we are a little blessed in having them as our neighbors. Our neighbors can always tell when we’re going through time: we are wearing sweatpants, t-shirts, and hats because we haven’t slept or showered yet. Our facial hair has grown in because we haven’t had time to shave. We don’t have time to do too much besides a sleep rotation and listening to music.

Normally during the last day of her meltdown, she’s fine…and our neighbor will come and pick her up for a couple of hours so we can rest and recharge…

We take a lot of Selfies

Angela has turned into a huge selfie and Facebook fiend. According to her, we must take them…and I share with the whole world of my friends! Every time I turn around I hear, “Bubba…take a photo of us! Bubba…take a photo of my baby doll!” Yeah, but I don’t mind it…I love taking selfies with us. She shows her genuine smiles and personality.

The photo above, you can see her and her Baby Alive she got for Christmas from her Aunt Beverly. She takes that thing with her everywhere. “What happened to her hair??” You ask? Well..she just loves playing with her doll baby’s hair. No amount of diluted fabric softener and brush is gonna help this poor baby out! lol. It just shows how much she loves it. On a positive note, they have the same colored eyes!

Then There Was Easter

We all couldn’t wait for Easter! She got to wear her new dress that we all helped pick out. She was also excited to see what the Easter Bunny gave her and the extra things we put into there. She totally loved her new Easter stocks that Stephen picked out for her. She then suffered from a belly ache from chowing down on her huge white chocolate bunny she got from Grammy and Grandpy (Stephen’s parents) and all the candy.

After our Easter Dinner, I setup a special Easter Egg hunt for her in the front yard…and even hid some money in it. I kinda had no choice but to put money in it…she said I had to! So I did! She’s such a boss lol. Though, she had so much fun in trying to find all of her plastic eggs, and she’s keeping her plastic eggs forever, according to her. Here’s a preview of her dress, and the stockings and socks she picked out…and yes…I did her. It’s fabulous! (You better agree with me).

Well, we are pretty much all caught for now. I have so many other stories to share with you, but I’ll do that in the next day or two. As always, thank you so much for all of the kind words of love and support. They are so greatly appreciated by all of us!